How to Minimize Warpage in HP MJF Parts

The HP Multi Jet Fusion (MJF) printing process is similar to injection molding in a few ways. MJF and molding are both heat-based processes that melt raw plastic to form the final part shape. Because of this, there are similarities in how to properly design and prepare a part for each manufacturing process.

Just like injection molding, we want to control the heating and cooling in MJF printing to ensure good part quality. The MJF process uses a combination of lamps and thermal cameras to do this. By monitoring and controlling the heating/fusing and cooling process we can prevent or minimize defects like warpage.

Warpage is a possible defect in any polymer process that involves heat. Warpage is especially common in long, thin, flat parts. (aspect ratio greater than 10:1) When plastic cools from molten to solid, it contracts to take up less space. When one area of a large flat part cools before another area, it can “pull” the part towards it. With small compact parts (as opposed to long thin parts) it is much easier to control the cooling and prevent warpage.

For large, thin, flat parts, we recommend placing the parts parallel to the X-Y plane. This causes the part to melt and cool at a consistent rate. To further prevent warpage, align the length of the part in the Y-axis. The lamp carriage moves in the X-axis, so it will fuse the entire part at once when it move across. Along these same lines, try to avoid fast cooling if warpage is an issue. This allows the parts to naturally cool while they’re “held in place” by the surrounding powder.

Parts placed in the center of the build volume towards the bottom will be the least prone to warpage. This is because it will cool the most uniformly (from the outside in)

Figure 2: Avoid warpage by placing parts flat in the center-bottom of the build area 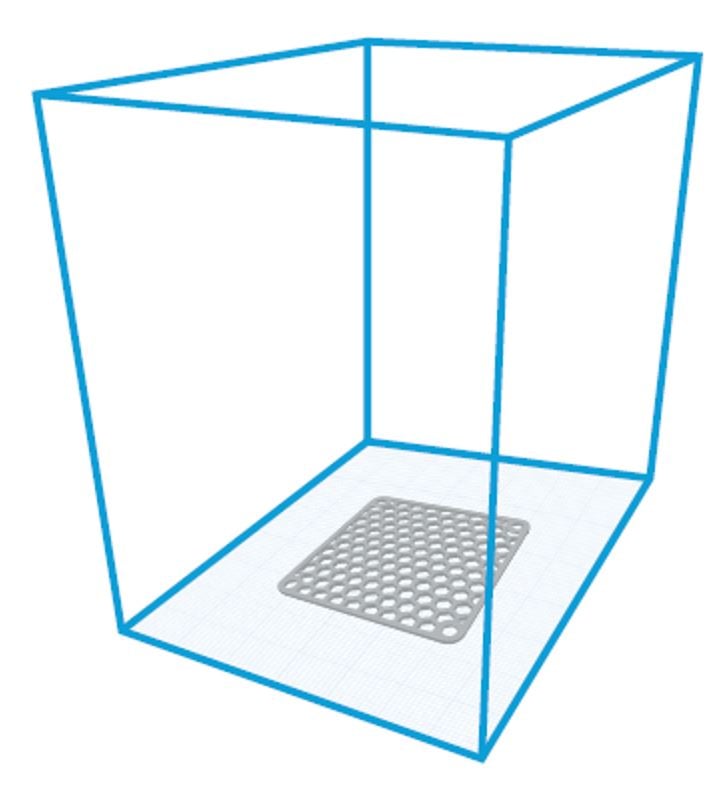 If that still doesn’t work, we have a few more options. One, we could print other parts, or even sacrificial parts, surrounding this large one. This, in effect, cages in the bigger part to hold the heat in and also slows down the cooling so it’s nice and uniform. Just like injection molding, we can’t let one area cool faster than another or it will warp. The other option is to add some ribs or supporting geometry to your part to prevent warping. Depending on your application this may or may not be possible. You can design in support bars to keep a part aligned while it cools, then snip the alignment bars off. This is similar to trimming the plastic from the gate in a molding process.

PA11 will be most susceptible to warpage. If flatness is a major concern, we recommend using PA12 or PA12 with glass beads. If PA11 is necessary, use the Fast print mode. Regardless of which material is used, the HP MJF parts are usually flexible enough to easily be re-shaped or pushed into their final mounting position.

Keep these best practices in mind when designing and preparing your MJF prints, and you should be able to eliminate or at least minimize warpage in your parts.

Why is additive manufacturing unstoppable?

MasterGraphics offers best in breed printing solutions from HP, 3D Systems, 3D Platform, Ultimaker, and Oce’. We view printing not merely as a function but as a method for conveying design intent.